What is Cloud EMV? Everything You Need to Know [VIDEO]

For software companies looking to switch out their payment technology to support the more-secure EMV chip-enabled cards, the implementation process can be a bit intimidating. Payment integration between Point of Sale (POS) software and EMV-capable terminals is quite difficult and is subject to pretty rigorous certification and audit standards. To mediate that, many businesses and software resellers now offer Cloud EMV to bypass the majority of the integration complexity.

The transition to more secure payment technology using EMV standards has been going on for nearly a decade to reduce instances of fraud. For most US businesses, EMV standards have been enforced since 2015, except for some industries like gas stations.

As a quick reminder, EMV is the payment technology that supports credit & debit cards with a smart chip. EMV originally stood for “Europay, Mastercard, and Visa”, the three companies which created the standard.
So, what is Cloud EMV, and what are its benefits?

While EMV adds an extra layer of security, it doesn’t necessarily protect the account number. Semi-integrated solutions were an attempt to keep secure data from flowing through the POS register. Even though the register still has to talk to the terminal directly to retrieve the cryptographic signature and account number from the chip, the terminal forwards the information directly to the payment gateway rather than back to the POS.

With Cloud EMV, the cycle is completely reversed. The POS is no longer physically attached to a terminal, and the POS doesn’t have to communicate directly with the credit card terminal. Because the POS integrates with Paya Connect, the POS can send a message up to the Cloud with the transaction info and specifies the terminal ID. The Cloud can reach out to that terminal to get the information (the account number and cryptogram) and then builds that authorization message to pass it off to the card issuer. 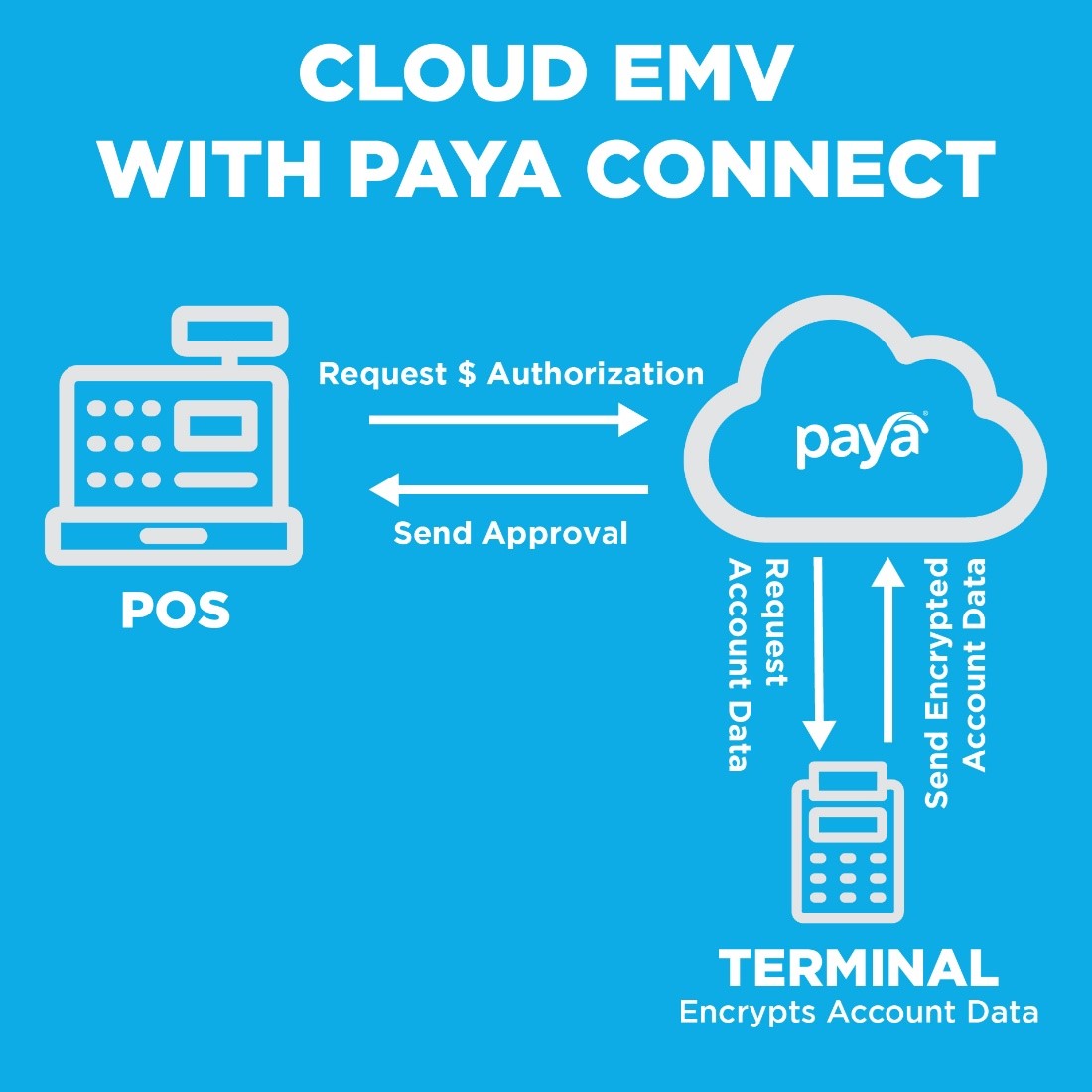 Cloud EMV uses a completely different flow than traditional EMV. Paya Connect communicates to both the POS and the terminal, which eliminates the need for a POS to communicate with the terminal directly. This breaks any kind of connections between the POS and the card holder data, so merchants don’t ever see sensitive account numbers passing through their ecosystem.

Additionally, since the POS is decoupled from the payment transaction itself, there’s no need to know how to talk to the terminal, thus there is no need for software developers to learn multiple programming languages to connect to different terminals. Paya Connect’s Cloud EMV already integrates with a variety of terminal devices, so a variety of terminals can be added with virtually no effort. Plus, this eliminates the need to get POS applications through problematic, time consuming EMV certification with processors.

So how does Cloud EMV simplify the implementation of the EMV standard?

First, there’s no tethering of the POS system to a device. You literally get a device shipped to you, plug it in, and simply connect it to the internet via WIFI or Ethernet cable.

Then, a “conversation” happens between the Paya Connect Cloud and that device to establish connectivity. At that point, the register only needs to know the identifier of that terminal, and the terminal only needs to know how to respond back to the gateway. A new transaction would send the terminal identifier to the Cloud, which in turn will reach out to that terminal wherever it is, and get the account number and the cryptogram for that transaction.

The main difference between having a physical terminal connected to a POS and a Cloud EMV solution is that it lessens the amount of time it takes the POS software developer to do the integration, and it severely lessens the complexity of what the POS register has to do.

Paya’s partners don’t have to go through an EMV certification when they do their software development.—Paya does the EMV certification directly from the terminal to the Paya Connect Cloud. The partner simply connects to Paya’s Cloud, talks that one language, and sends a very “skinny” authorization request—that is, one that has minimal data in it—that will then be augmented once we talk to the terminal.

Other Benefits of Using Cloud EMV

Using a Cloud EMV solution for your payment processing needs also simplifies the notion of location and proximity since the Cloud only needs to know the address of the device which is authorized to communicate with the ECR Point-Of-Sale, but it doesn’t require that they are connected or co-located.

In a standard retail environment, if you have people walking the floor, or you’ve got register systems that can communicate to multiple different places within the storefront, a device using Cloud EMV could walk all over the place as long as it’s connected to the Internet.

This eliminates the need to be anywhere near close to where that register system is to process the transaction. Only the Cloud needs to know how to get in touch with it, and they’re in constant communication so it can move anywhere it needs to.

For ISVs, ISOs and VARs interested in replacing their existing traditional POS terminals with innovative solutions improving the security of electronic payments and protection of cardholder data, Cloud EMV is the way to go.
The key benefits of Cloud EMV: